and build your community from £9.99/month

apping into a sense of community in any city can be difficult, but the need to connect with others has never been more important. After spending some time at Gaia’s Garden The Stack has pulled together some of the best community led projects and spaces in London where you can enjoy the summer sun whilst helping support local communities.

Nestled between towering skyscrapers and beneath the shadow of St Paul’s Cathedral hides an inner city oasis. An urban garden filled with blooming plant boxes, pastel hued crate seats and a center stage decorated with climbing ivy - this is Gaia’s Garden, the inner city paradise designed to bring Londoners closer together.

It is estimated that by 2050, over 78% of the global population will live in our cities and Gaia’s Garden provides a glimpse at the way we can ensure our urban areas and the people who live there thrive. Combining live music, workshops and talks all conceptualised to bring Londoners together through sustainable practices.

Gaia’s Garden occupies a space in Holborn that has been dog-eared for future development which has, in the meantime, been offering workshops, live music and a welcome escape from the city hustle until September of this year.

Named after the Greek goddess of the Earth, Gaia’s Garden aims to present a multidisciplinary program that presents sustainability through a more inclusive and decidedly feminine lens.

This project is a collaboration between Culture Mile, Play Nice, and the Dominvs group. The idea itself stemmed from five pioneering women from across different creative disciplines, crafting a free and accessible space for Londoners to learn about sustainable practices across economics, the environment and social stratergies.

Gaia’s Garden planted its roots with the help of over 200 young people from around the city, gardening and building the space that can be enjoyed by all. Armed with the aim of tightening the bonds of people from different communities and reclaiming what it means to live in a city by fostering connections to nature and to one another. Gaia’s Garden quite literally became London's very own backgarden.

The space is open daily from 9am to 9pm until its closure at the end of the month, so whether it is having a quiet place to sit before work or meeting up with friends for lunch the space can be used to connect with the people you love and escape the city even if it's only for an hour.

Running alongside this is a rosta of free events, from workshops hosted by community groups, to recognising that art is one of the biggest socio-political means of communication and as such inviting DJ’s, movement artists and musicians to perform and share their messages.

Join Gaia’s Garden for their after party. 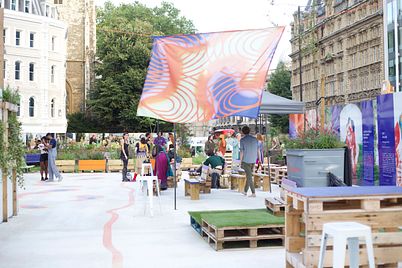 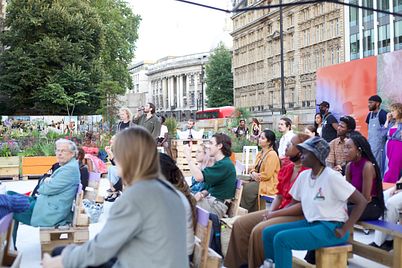 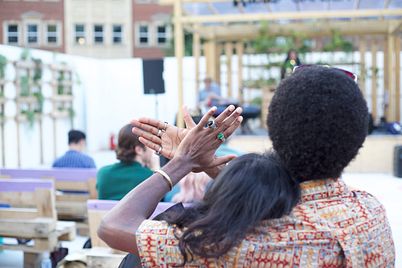 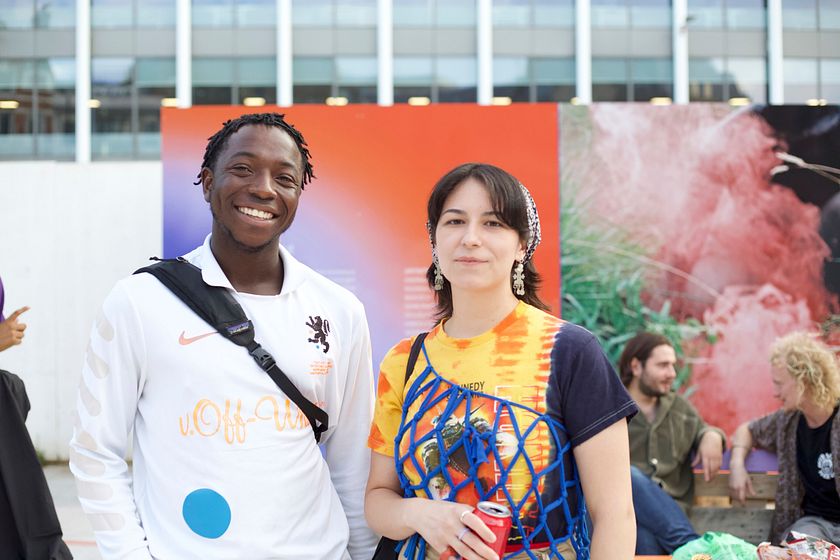 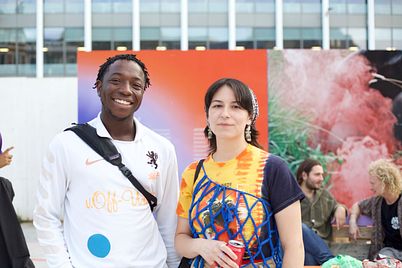 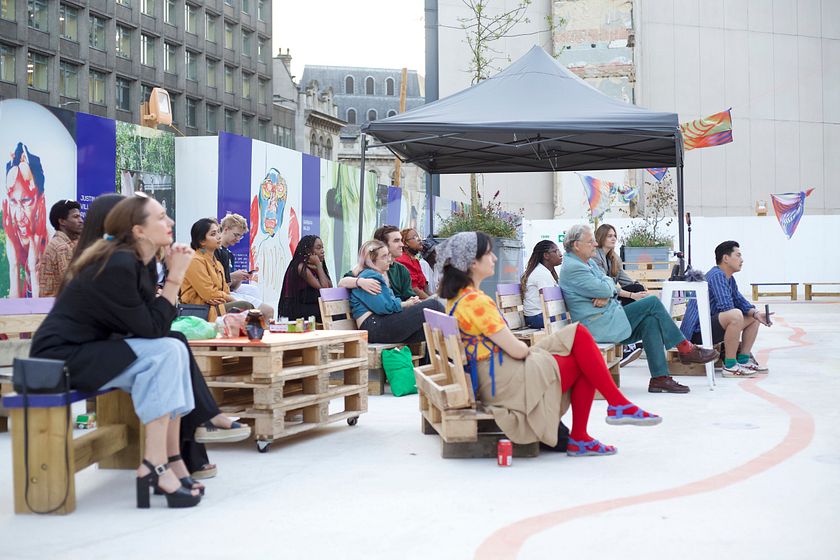 The one for a view - Dalston Roof Park

Dalston Roof Park is the area's only rooftop events space, brought to you by the Bootstrap Charity. All of the profits made at this stunning inner city bar goes towards empowering young people and businesses to succeed professionally.

Inspired by Robert Hammond’s New York, High Line Bar, the Dalston Roofpark begins its story in much the same way, transforming a once forgotten space into an unexpected garden framed by some of London’s most recognisable architecture.

The space boasts a collection of allotments cared for by volunteers during the day before transforming into a music and cocktail-bar by night.

The space is also part of a larger collective of the Bootstrap charity, including studio spaces from 100sqft to 2,5000sqft used for young businesses and the Print House gallery that exhibits local creatives' works and launches.

Get ready to dance the nightaway at a free all night DJ set from Joe Turner and Lawrence Heart, Friday 20th of August

Or join a class with film maker Caveh Zahedi on how to bring about political change called "How to Overthrow The Government (Legally)".

The one for the kids - Meanwhile

Meanwhile, located just near Paddington station is one of London’s oldest community funded and run initiatives set up by artist Jamie McCollough in 1976. After initially struggling to get permission and funding to set up the gardens the artist decided to get on with the job and thus the name of the space, meanwhile was born. Located near Grenfell, this area of London struggles with some of the most extreme examples of wealth and living disparity, McCollough set up this inner city haven to provide relief and a sense of community for the area's local people.

Now seen as a potential plot for monetary gain the need to protect this space grows day by day. Used as a community base for over 40 years the founders describe this location as being a place where “local schools bring tomorrow's ecologists and botanists for an afternoon of planting, local band the Metronomes use it to rehearse and train a new generation of Caribbean musicians and volunteers, many of them going through hard times, use it to shelter from a rainy lunch time while they are working in the gardens.”

Currently campaigning with the aim to secure the lease on the building that will allow for the gardens to continue to be the centre of community effort and spirit, combining an “essence of autonomy, inclusivity and of collective work.”

Gain access to the community garden’s under 6 play area, for £2 unlimited access for the day where children can take a paddle in the pool or take nature walks within the initiative's four acre plot.

Or why not bring your own picnic and enjoy the views of the Moroccan Garden for some inner city quiet.

The one for art lovers - The Koppel Project

Location: various sites across the city

Established in 2016 The Koppel Project is an arts based charity in central London, aiming to support early-career artists through subsidised studio access, gallery and events spaces right in the heart of the city. The project also works alongside partners across the arts and cultural sectors to provide innovative education solutions that help re-invent traditional types of learning to support young creatives from an early age.

Utilizing the cache of abandoned buildings throughout the city in the service of the arts and of the local community. Their base can be found in Baker Street, Stoke Newington where their gallery dog Alice is more than happy to greet visitors.

Take a trip to the Hive location to see an exhibition set up by Goat Magazine called Great Conversations.

The one for a show - Arcola Theatre

The Pioneering, East London based, Arcola Theatre operates on a pay-what-you-can basis on every Tuesday to allow the local community to access the arts in an affordable way, bursting the bubble that theatre should come with a steep price tag or be a privilege. Arcola plays host to exhibitions and trail blazing premiers as well as bold reinterpretations of theatre classics.

At the heart of this theatre hub is the aim to empower the next generation of theatre, from actors in the spotlight to the people behind the scenes that make it all happen. Their Grimeborn Festival unlocks opera for everyone, whilst the Playwrought scheme provides budding writers the opportunity to develop scripts to production level as well as the Arcola Lab initiative that offers 26 weeks of free rehearsal space to culturally diverse and refugee artists.

From their outside theatre space to drinks at the bar stocking and supporting locally brewed ales, wines and more, Arcola is a great space to meet up with friends and support the talent of tomorrow.

Catch the Nevergreen: Work in Progress, a debut show that tells the untold story of environmental pioneer Rachel Carson.

Or check out Seriously Annoying, a show exploring why statues have more legal protection than living women.

As Gaia’s Garden paves the way for city living, here are The Stack's top picks for community driven event spaces.

What We’re Reading: Five Books By Stack World Members That Will Change The Way You Think

Read these women in 2022 and get to your goals quicker

“Of Course I’ve Had The Ass-Grab Before”

Be Inspired By The Stories Of Sportswomen

In need of motivation? These autobiographies by female athletes will supercharge your drive

5 Books That Will Change Your Life

These female founders recommend the books that helped them grow

London's Favourite Florists On Where To Shop Small This Christmas

London Exhibitions To Visit This December

When Will Women Stop Being Subject to The Curse Of "Inspiration"?

The Stack takes a closer look at the portrayal of women in Wes Anderson’s latest film, The French Dispatch

The Essentials According To Bianca Saunders

From universal wardrobe staples to SPF and Margiela candles: everything you should own according to menswear designer, Bianca Saunders

What do Salvador Dalí, Queen Victoria And Vivienne Westwood Have In Common? You Can Find Them All At This Exhibition

We go down the rabbit hole for a detailed look at the V&A’s exhibition, Alice: Curiouser and Curiouser

A Love Letter To Solo Dining

The best restaurants in London to take yourself on a date - according to cook and writer, Bre Graham

Welcome To Clerkenwell - All The Best Spots In EC1 For Brunch, Brews And Business Meals

The postcode we love for work, life and culture

The Meal That Changed My Life, With Suzie de Rohan Willner - CEO of TOAST

Suzie de Rohan Willner shares how one very simple meal changed her perspective for good (spoiler, it's not toast)

Snapped At The Stack - All The Photos From Our Office Party