nternational travel is firmly back on the agenda and with the new American Express Centurion Lounge at London Heathrow Airport, we cannot wait to catch flights not feelings. Situated in Terminal 3, it is their first European lounge which has taken cues from trailblazing leaders in British art and design, and has collaborated with award-winning British bath and body care company, Soapsmith to deliver their signature scents to the lounge.

For Soapsmith founder, Samantha Jameson, she knows that whether travelling for business or pleasure, our experience always begins at the airport. “London is such a vibrant, cosmopolitan place and we wanted to emulate that energy in the lounge whether you’re a frequent flyer or just passing through. Everyone is itching to travel right now and Soapsmith scents will take people on a journey through London.”

Soapsmith founder, Samantha Jameson was inspired to launch the brand after hearing that manufacturing was dying in in the UK.

The partnership announcement comes in the middle of Black History Month, which is an annual event highlighting the impact and contribution of the Black British community and it was while listening to an LBC radio show about the sharp decline in British manufacturing that catalysed Samantha to initially start the business. Over a decade later and now glittered with awards and accolades, all of the Soapsmith products are still made in the UK with scents inspired by differing areas of London including Bloomsbury, Camden and Brick Lane and are stocked at the likes of Liberty of London and Fortnum & Mason.

A range of bath and body care will be available in the AMEX Centurion Lounge, with scents seasonally rotated. Launching with “Hackney”, in homage to the borough Samantha grew up in and is a grounding blend of rosemary, bergamot and sandalwood.

“We’re not in the British countryside, we’re in the big smoke,” she muses and the Soapsmith scents are a testament to London life. She intuitively understands the energy and beating heart of London, which brings so many people to our booming, beautiful capital. Her signature scents embody the different ‘vibes’ of London in the same way that Londoners often collectively navigate from North to South and back to West in a single day. 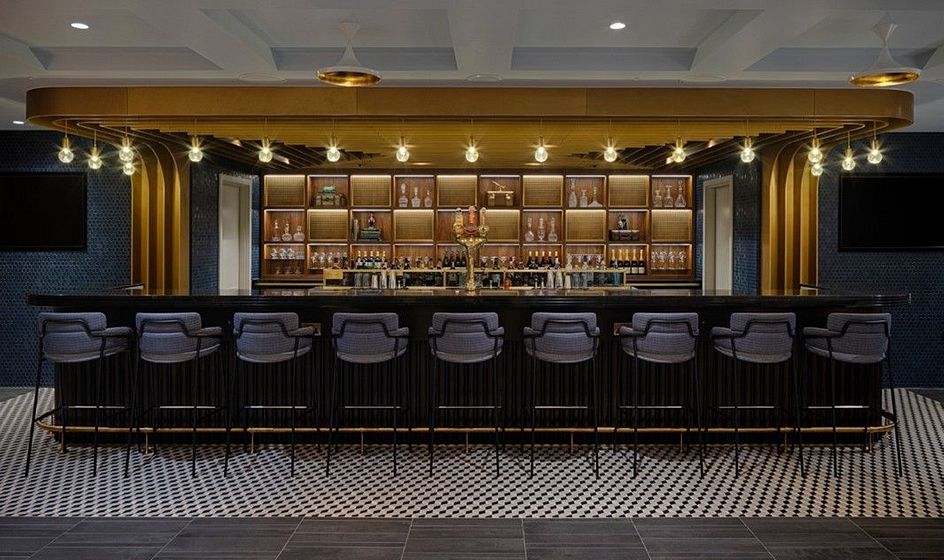 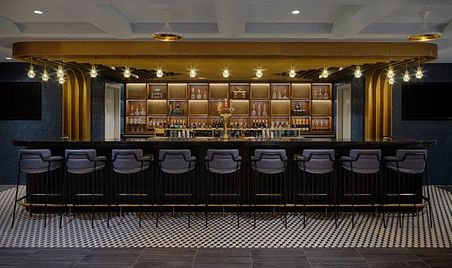 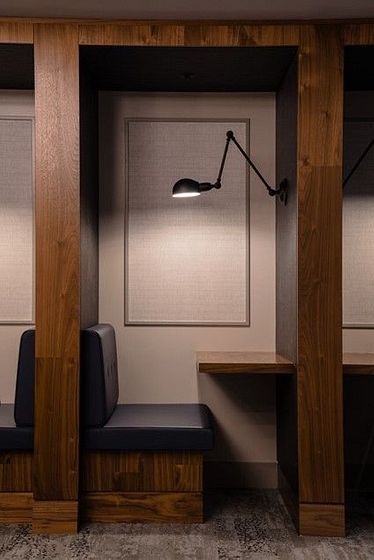 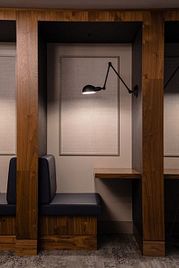 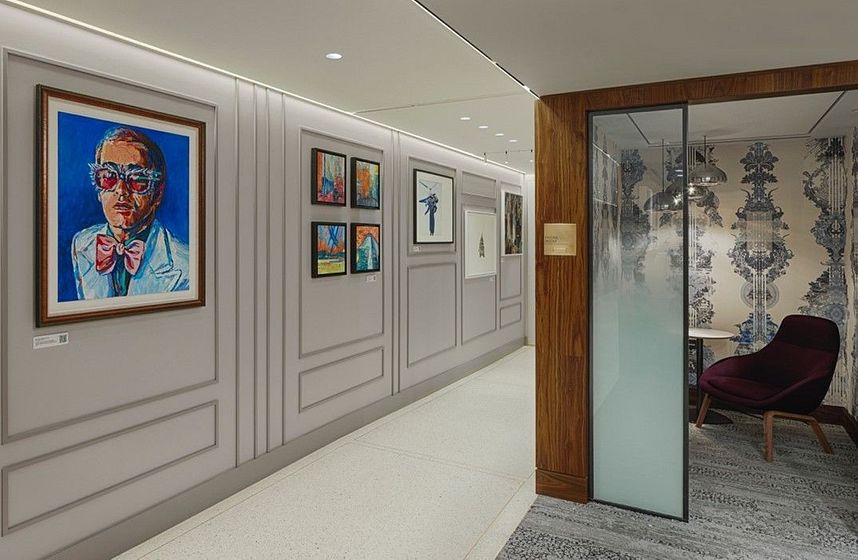 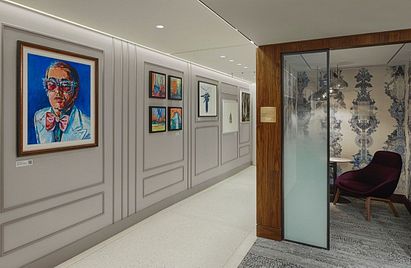 1/3
The bar area in the new AMEX Centurion Lounge.

For Samantha, her partnership with American Express felt intuitive from the start having been a long-term customer. “AMEX has historically supported and produced initiatives to help small businesses like myself. I was surprised when they approached me but as a London-based brand, it’s a perfect fit. Our brand story, fragrances and inspiration behind the scents resonated with the AMEX team. They approached us and after trialling the products, made the decision to partner with us.”

Alongside Soapsmith, other highlights of the Centurion Lounge include a menu inspired by London’s multicultural heritage by Michelin-Star chef Assaf Granit and artwork by Norman Parkinson, Carne Griffiths and Stephen Marshall. The only thing left to do is book a destination but with American Express truly bringing the best of Britain to Heathrow with their curated lounge, it would secretly make you enjoy a delayed flight.

With flights back on the agenda, Soapsmith's collaboration with AMEX aims to get us in the holiday mood, well before take-off.

What You Missed At The Stack Hot Girl Sabbatical Conversation Dinner

About Last Night! All The Pictures From This Incredible Conversation Dinner At House Of Koko

What You Missed At The Stack Out Of Office Party

About Last Night! All The Pictures From The Stack World's Out Of Office Party At The Curtain Club.

The UK's breakout superstar Cat Burns shares her approach to writing, what she wants you to take away from her music and the power of TikTok as she launches her 3rd EP and announces Ed Sheeran Tour

What You Missed At The Stack's Spring Party

About Last Night! All the pictures from The Stack World's Spring party last night at One Hundred Shoreditch

Mahalia: “I Know How Painful It Is To See Your Dream In The Distance But Not Know How To Go And Get It”

From getting more women in executive positions to the joys of home cooking, we caught up with London-favourite, Nieves Barragán Mohacho

Authentic deaf representation is, at last, breaking through to the mainstream as CODA takes home three Oscars

Celebrating Some Of London’s Coolest Mums This Mother’s Day

Photographer Danika Magdelena captures London mums at home with their babies - from athletes and founders, to chefs and publishing directors...

So You Want To Write A Book? Publishing Expert Kerry Ryan Shares Her Top Tips

“Start now and don't listen to the inner critic”: join the club taking you from draft to book in 10 months

Go With The Flow: London's Dining Gems By The Thames

Riverside dining is where it’s at, here’s The Stack’s guide to our favourite watering holes with the best river views in the capital

The Essentials According To Fashion Stylist Leah Abbott

London fashion scene nobility and A-list stylist, Leah Abbott shares the wardrobe items that everyone should own and the essential products that get her through the day

This Women’s History Month, The Stack breaks down London’s best restaurant offerings - all headed by female chefs and founders

The Best Seafood Restaurants In London To Catch A Bite

Packed with culture, cuisine and cobbled alleyways, a getaway to Bristol has never been a better idea

Sublimely Surreal - A Review Of The Tate Modern's Latest Exhibition

36ft artworks and UK debuts, Surrealism Beyond Borders illustrates the global perspective of the Surrealist movement

Owning the Hyphen: “It’s a Privilege To Be From Two Cultures”

In the fourth installment of the Bvlgari Hotel’s ‘Breakthrough Women in Film’ series, The Stack gets an exclusive look at Nana Mensah’s Queen of Glory ahead of its theatrical release this Summer

Adwoa Aboah: “Once I had done the work, I became the work-obsessed, high achiever that I am now.”

The Stack gets to know queer dating agency, A Whole Orange ahead of their event at Shoreditch Nails

About Last Night - All The Photos From The Stack Office Party

Find yourself! A look inside The Stack's monthly party

The Best Restaurants In London To Take Yourself On A Date

A love letter to solo dining: spoil yourself with these recommendations by cook and food writer, Bre Graham

The Essentials According To... Matilda Goad

The London-based homeware designer shares everything essential to making her house a home. From her favourite peanut butter brand, to kettles, sheets and skincare

Spend Your Weekend With These Stack World Members

Stuck for something to do this wintry weekend? Why not use the opportunity to support women in business and connect with like-minded entrepreneurs?

What We’re Reading: Five Books By Stack World Members That Will Change The Way You Think

Read these women in 2022 and get to your goals quicker

“Of Course I’ve Had The Ass-Grab Before”

Be Inspired By The Stories Of Sportswomen

In need of motivation? These autobiographies by female athletes will supercharge your drive

5 Books That Will Change Your Life

These female founders recommend the books that helped them grow