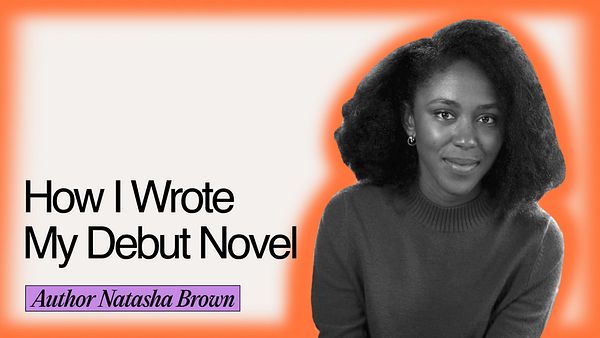 This event has ended

How I Got Started Writing My Debut Novel

Natasha Brown’s debut novel, ‘Assembly’, was snapped up by a major publisher in late 2020, with a six-figure pre-empt. But far from being your typical member of the literary elite, Natasha spent ten years working in financial services before putting pen to paper. Join us for a chat with Natasha about getting started on a book, from getting over imposter syndrome to the practical routines that helped her to get words on the page, and the powerful themes she communicates through ‘Assembly’.

Natasha Brown has spent a decade working in financial services, after studying Maths at Cambridge University. She developed her book, ‘Assembly’, after receiving a 2019 London Writers Award in the literary fiction category. The narrator of ‘Assembly’ is a Black British woman, who is preparing to attend a lavish garden party at her boyfriend's family estate, set deep in the English countryside. At the same time, she is considering the carefully assembled pieces of herself. As the minutes tick down and the future beckons, she can't escape the question: is it time to take it all apart? ‘Assembly’ is a story about the stories we live within - those of race and class, safety and freedom, winners and losers. It's about one woman daring to take control of her own story, even at the cost of her life. Natasha will be in conversation with Sharmadean Reid, Founder & CEO of The Stack World.

In this conversation, Natasha and Sharmadean will talk about the themes of identity, power and community that Natasha interrogates in ‘Assembly’, as well as her transition from financial services to writing.

A copy of 'Assembly'!

How I Got Started Writing My Debut Novel

Online
FREE - Included in your membership

For £9.99 / Month get access to the knowledge and insights to get to your higher ground

What is The Stack?
The Stack is an ecosystem created for a generation of women who are changemakers, entrepreneurs and innovators focusing on business, culture, society, beauty and wellness. It is primarily a media platform – but we take it one step further, creating a community and space for conversations and discussions through membership.
Is The Stack World only for women?
Nope! The Stack World is for anyone who believes in gender equality. Our content is catered to all women, but anyone is welcome to join and support.
What do I get as a member?
Membership to The Stack means exclusive access to virtual event programming as well as a members-only content. Hosted on Zoom, these events are curated by The Stack team especially for the driven, curious, creative women who make up our members and span business, culture, society, beauty and wellness.
What kinds of events will I have access to?
From talks with award-winning CEOs on how to get your business off the ground to home tutorials and self-care from beauty experts, expect exclusive virtual events, workshops, business classes and roundtable discussions – and much more. We even have a bookclub!
How long do I have to sign up for?
We offer a discounted membership for one year or sign up for a rolling monthly. You can cancel anytime you like.
Do I need to be a member to receive the newsletter?
You don't have to be a member to receive our weekly newsletter. This will be your weekly dose of content from Sharmadean Reid and The Stack team – it's a slimmed-down version of what our paid-up members get.